Michael Succeeds in Increasing Sentences, Including for A Breach of the Official Secrets Act | Michael Ellis MP Skip to main content

Michael Succeeds in Increasing Sentences, Including for A Breach of the Official Secrets Act 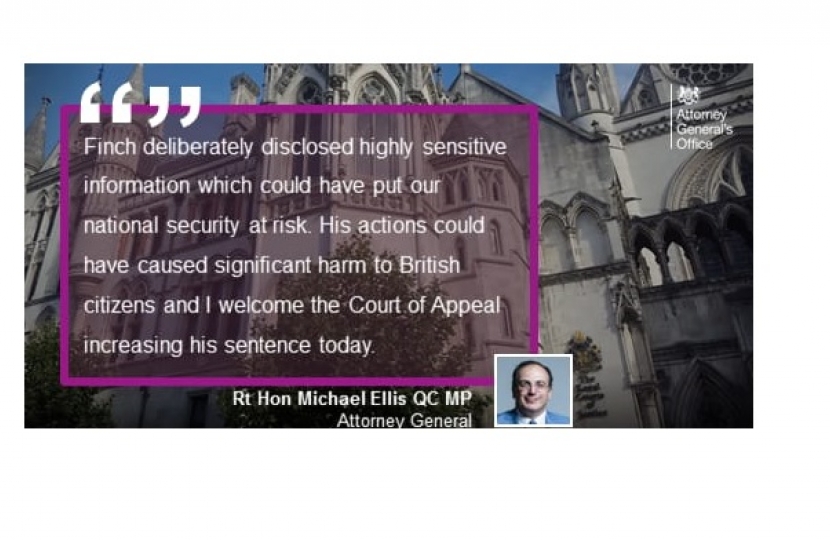 A couple of weeks ago, I personally presented a case at the Court of Appeal – under the Unduly Lenient Sentence (ULS) scheme - where I sought to increase the sentence of a former defence worker who disclosed highly sensitive information about a UK missile system.

The Court has recently agreed with me that the initial sentence was unduly lenient and have substantially increased the sentence of the offender, Simon Finch, from his original sentence of 4-and-a-half years, to 8 years’ imprisonment.

Finch was formerly employed by two major defence companies who provided contracted services to the Ministry of Defence. His personal circumstances deteriorated and he was sentenced to a suspended 16-week sentence for the carrying of a hammer and knife in public, but he did not tell his employer of the conviction.

Finch later left his job and began to plan the unlawful disclosure of highly-sensitive information about a UK weapons system.

Finch deliberately disclosed highly sensitive information which could have put our national security at risk. His actions could have caused significant harm to British citizens and I welcome the Court of Appeal increasing his sentence.

In another success in increasing sentences, which was announced on Friday, 19th March, my referral has resulted in an increased sentence for Timothy Brehmer from his initial sentence of 10-and-a-half years to 13 years and 6 months’ imprisonment.

Brehmer, who hitherto served as a Police Officer, had been conducting an affair with Claire Parry for around 10 years, however, on 9th May 2020 an argument broke out between the two, ending with Claire Parry texting Brehmer’s wife from his phone, stating that he was having an affair. During the argument that followed, Brehmer took hold of Claire Parry’s neck and compressed it with such force that she lost consciousness, causing neck injuries resulting in her death.

In an attempt to cover up his crime, Brehmer used a pocketknife to wound himself and claimed that he had been stabbed by his victim. He was nevertheless arrested at the scene and later retracted that statement, yet at his subsequent trial sought to defend himself by claiming that he had tried to eject Claire Parry from his car, accidentally injuring her in the process.

You may wish to read more about this case in the following Guardian newspaper report: https://www.theguardian.com/law/2021/mar/19/appeal-judge-increases-dorset-police-officers-jail-term-for-strangling-lover

I am proud of my involvement with the Unduly Lenient Sentencing scheme and the justice that it hopefully brings for victims of some of the most horrific crimes.

Just in 2021 (so far) alone, I have been successful in seeing 15 cases which I referred to the Court of Appeal receive an increased sentence, after the Court agreed with me that their original sentences were unduly lenient.

More information about the ULS scheme, including information on how you can refer a case, can be found here: https://www.gov.uk/ask-crown-court-sentence-review.

You can keep informed about my work as Attorney General - including announcements of sentence increases via the Unduly Lenient Sentence scheme - on the Attorney General official twitter feed, which can be found here: https://twitter.com/attorneygeneral