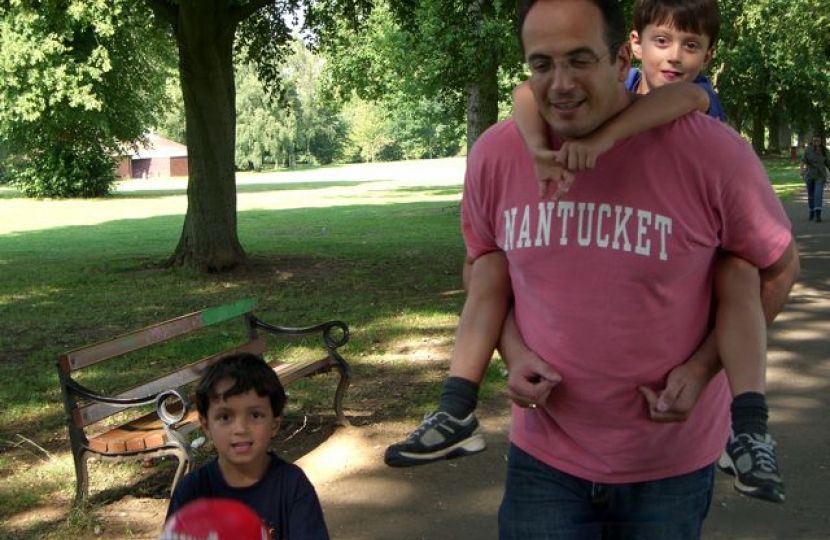 Michael Ellis MP was born in Northampton at the Barratt Maternity Home in 1967 and he has lived and worked in Northampton his whole life. Michael graduated from University with a Bachelor of Law degree, obtaining a First Class in British Constitutional Law and winning the Regional Government Award for the highest scoring in that subject.

Michael was subsequently Called to the Bar at the Honourable Society of the Middle Temple in 1993 and was thereafter a practising Barrister in the criminal law field for 17 years in the Northampton area. Almost all of his defence representation was for clients on Legal Aid who were unable to afford private legal representation. Michael ceased legal practice when he was elected to Parliament in May 2010.

In December 2006 Michael was selected by the general public in an Open Primary to be the Conservative Candidate standing for Parliament to represent Northampton North.

In the General Election of May 2010 Michael defeated the sitting Labour candidate and was Elected to the House of Commons as Conservative Member of Parliament for the constituency of Northampton North.

In February 2011, Michael became a member of the Home Affairs Select Committee of the House of Commons, one of the most high-profile committees of the House, which deals with issues such as policing and immigration, and he played a leading part for over four years in the major enquiries the Committee conducted, including into Police conduct and surveillance, and national security issues.

The then Prime Minister David Cameron appointed Michael to be Parliamentary Advisor to the Chairman of the Conservative Party Rt Hon Lord Feldman of Elstree in September 2012, a position Michael held until May 2015.

At Parliament, Michael established the All-Party Parliamentary Group on the Queen’s Diamond Jubilee and became its Chairman. He proposed the gift, from both Houses of Parliament, to celebrate The Queen’s Diamond Jubilee, of a stained glass window for Her Majesty The Queen. He personally raised nearly £100,000 from Parliamentarians from across the political spectrum towards this project and no public funds were therefore needed.

In May 2015, Michael was appointed Parliamentary Private Secretary to the then Home Secretary, Rt Hon Theresa May. Michael supported the Home Secretary in this role, acting in an advisory role and as a conduit between her and other Members of Parliament.

In January 2018 Michael was promoted and appointed Minister for Arts, Heritage and Tourism at the Department for Digital, Culture, Media and Sport. Michael’s ministerial portfolio included responsibility for the Arts, (including theatre, dance, art exhibitions, opera, ballet), Libraries, national museums (including the British Museum, the Tate, the V&A, Science Museum etc.) and for listed buildings, the historic royal palaces, cultural diplomacy and cultural property and the tourism sector.

In July 2019 when Boris Johnson became Prime Minister, he promoted Michael further, appointing him to the position of Her Majesty’s Solicitor General for England and Wales. This role draws on Michael’s legal experience, and sees him supporting the Attorney General in the superintendence of the Government Legal Department, the Crown Prosecution Service, the Service Prosecuting Authority, HM Crown Prosecution Service Inspectorate and the Serious Fraud Office, as well as on civil litigation and advice on civil law matters and on the public interest function.

Michael was appointed as one of Her Majesty’s Queen’s Counsel in July 2019.

In October 2019 Michael was appointed to Her Majesty’s Privy Council.

In March 2021 Michael was further promoted to the position of Her Majesty's Attorney General for England and Wales.