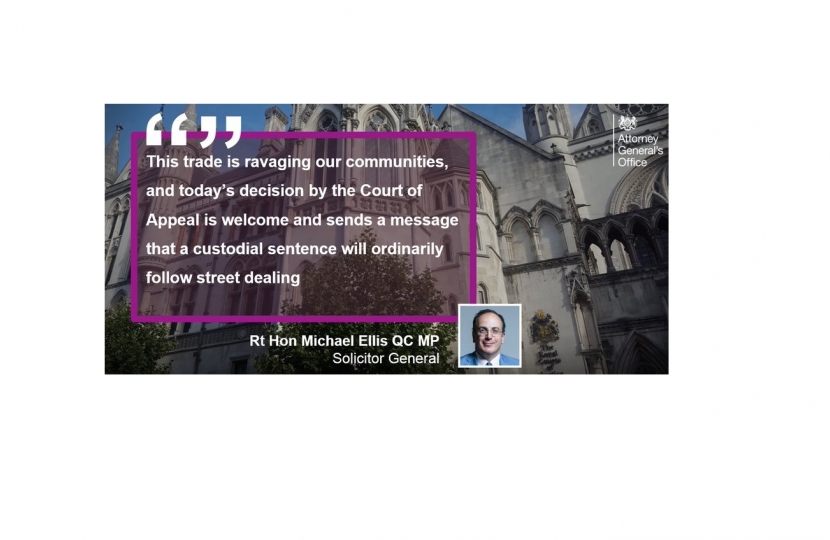 One of the most important elements of my role as Her Majesty’s Solicitor-General for England and Wales is to refer to the Court of Appeal for review those sentences passed in any Crown Court which I consider to be “unduly lenient”.

Under the ULS scheme, victims of crime, members of the public, and prosecutors can ask for certain Crown Court sentences to be reviewed if they believe they are too low. Only one referral by anyone is required in order for it to be considered.

I am proud of my involvement with the unduly lenient sentencing scheme and the justice that it hopefully brings for victims of some of the most horrific crimes.

Just in the month of December 2020 alone, I have been successful in seeing 8 cases which I referred to the Court of Appeal receive an increase in their sentence – after the court agreed with me that their original sentences were unduly lenient.

These cases included drug dealers based in Yeovil, Hampshire, London and even a Prison Officer who supplied drugs into prison. Other cases included rape and burglary.

Three prolific Northampton burglars had their sentences increased following intervention by the Attorney General. Matthew Lawrence Brown, 30, Terrance Brown and Otis Barrett, both 26, carried out 45 burglaries over a 3-month period throughout the national lockdown.

They stole items worth a total of almost £300,000 and caused around £120,000 in damage to the premises they burgled. The gang’s spree was stopped after they were caught red-handed by police and arrested in May. All three had their sentences increased by three years – with Matthew and Terrance Brown sentenced to 9 years imprisonment and Otis Brown to 9 years and 4 months.

Details of these cases can be found on the Attorney-General’s Office Twitter page: https://twitter.com/attorneygeneral.

More information about the ULS scheme, including information on how you can refer a case, can be found here: https://www.gov.uk/ask-crown-court-sentence-review.