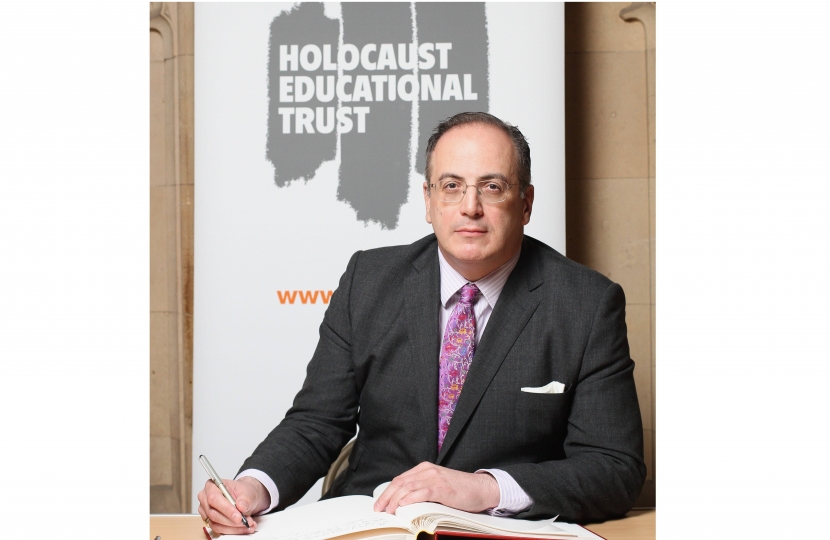 This year, Holocaust Memorial Day was on Sunday, 27th January. The date signifies the anniversary of the liberation of Auschwitz-Birkenau – the largest Nazi death camp – and the Day itself encourages remembrance of the six million Jews murdered during the Holocaust, the millions of people killed under Nazi Persecution and also those in subsequent genocides since.

With rising anti-Semitism in the UK it is as important as ever to mark this event. I signed the Holocaust Educational Trust’s Book of Commitment in Parliament – as I have done in previous years – and in doing so I pledged my commitment to Holocaust Memorial Day, honouring the millions who were so tragically and systematically murdered during the Holocaust, as well as paying tribute to the extraordinary work of those who continue to work tirelessly to educate young people about these horrors. The work of the Holocaust Education Trust is as important now as it has ever been and we must continue to educate people about such horrors to discourage any forms of hate towards groups of people. Education is crucial in ensuring nothing like it ever happens again.

On Wednesday, 23rd January I also attended an event to mark the Day at the Foreign and Commonwealth Office (FCO) which was joint hosted by the FCO and the Embassy of Israel. The event was a fitting tribute to those who were murdered during the Holocaust, and the Foreign Secretary Jeremy Hunt MP made a powerful and moving speech which rose to the occasion. You can watch part of that event online here: https://www.belfasttelegraph.co.uk/video-news/jeremy-hunt-unveils-bust-of-frank-foley-at-holocaust-memorial-commemoration-37741405.html.