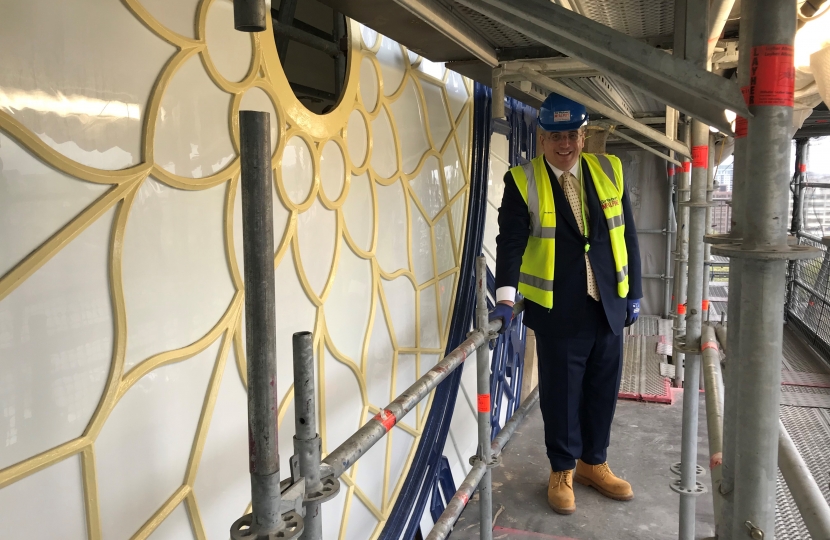 Anyone who has visited Westminster in recent years will have seen the scaffolding surrounding Big Ben, the clock tower at the Houses of Parliament. Big Ben is undergoing much-needed major renovation and conservation work, in order to keep one of our most recognisable landmarks in top condition.

The works began in 2017 and are due to continue until 2021. On 11th July, Big Ben, the Great Bell of the Elizabeth Tower, turned 160 years old, and this iconic structure is one of the most recognisable structures anywhere in the world, and is a World Heritage site and Grade One listed building.

I was delighted to be invited to visit the work site and inspect the white blown-glass clock faces being installed by the specialist glasswork artist John Reyntiens. In 2011 John won the commission to make the Queen’s Diamond Jubilee Window, which was presented to Her Majesty The Queen as a gift from Parliament in celebration of her 60 years on the throne in 2012. I chaired the Committee in Parliament that organised the gift and have known John since then.

We therefore climbed up many steps on the outer scaffolding around the 315 foot high Elizabeth Tower to inspect the new glasswork from the outside, an extremely rare (and rather nerve-wracking) privilege. I was extremely impressed with what I saw – the clockface was very intricately designed and the complicated cut glasswork was faultless. The colour scheme of the tower has reverted back to the original plans, as made by Augustus Pugin when the Palace of Westminster was rebuilt following a fire in 1834. One of the original 1850s features returning to the clock tower is that the hands of the clock will be in a beautiful shade of blue called ‘Prussian Blue’, as opposed to the black that has been in place since around the 1930s.

I very much look forward to seeing the tower unveiled once again as soon as the conservation work has been completed.