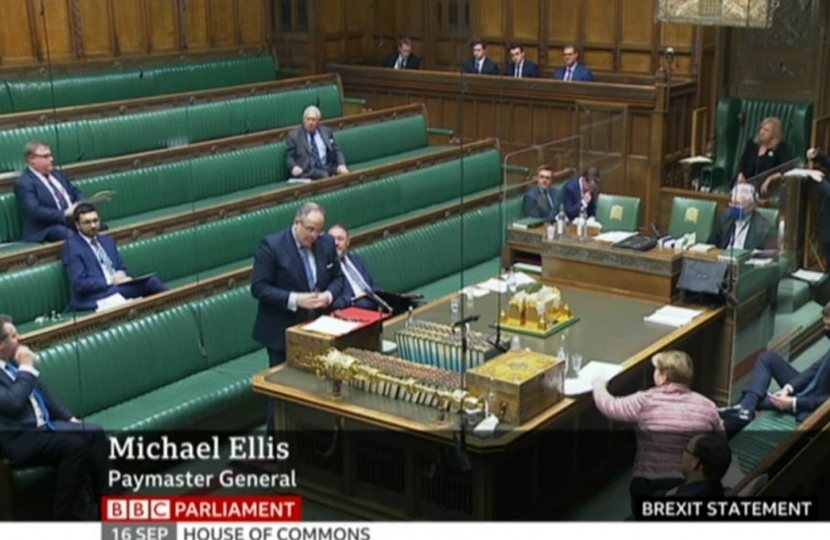 On Thursday, 16th September, just a few hours after being officially appointed Her Majesty’s Paymaster General, I made a Statement about Brexit in the House of Commons and took questions from MPs from both sides of the House.

While the UK was a member of the EU, some of the most difficult issues that Governments of both main parties faced were to do with regulations, such as services directives, REACH—the registration, evaluation, authorisation and restriction of chemicals—reforms of agricultural policy, and very many pieces of financial services legislation. Often such laws reflected unsatisfactory compromises that had to be made with the other EU members.

Much has already been changed of course but, given the extent of EU influence over nearly half a century, the task is a mammoth one. First, we will conduct a review of so-called retained EU law; by this, I mean the many pieces of legislation that we took on to our own statute book through the European Union (Withdrawal) Act 2018. We must now revisit this huge but anomalous category of law, and we have two purposes in mind. First, we intend to remove the special status of retained EU law so that it is no longer a distinct category of UK domestic law but is normalised within our law with a clear legislative status. Unless we do that, we risk giving undue precedence to laws derived from EU legislation over laws made properly by our Parliament.

The review also involves ensuring that all courts in this country have the full ability to depart from EU case law according to the normal rules. In so doing, we will continue restoring this sovereign Parliament and our courts to their proper constitutional positions, and indeed finalise that process.

The government intend to begin a new series of reforms of the legislation we have inherited on EU exit and we will also unleash Britain’s potential as a world leader in the future of transport.

Indeed, the Transport Secretary will set out ambitious plans including modernising outdated EU vehicle standards and unlocking the full range of new transport technologies. We also intend to repeal the EU’s court services regulations, a good example of a regulation that was geared heavily towards EU interests and frankly never worked for the UK. We will drive forward our work on artificial intelligence, where the UK is already at the forefront of driving global progress. We will shortly publish the UK’s first national AI strategy, setting out our plans to supercharge the UK’s AI ecosystem and set standards which will be world leading.

I recognise Brexit was not a choice originally supported by all in this country, but Brexit is now a fact. This country has now embarked upon a great voyage. We each have the opportunity to make this new journey a success - to make us more contented, more prosperous and more united.

You can watch my appearance in the House of Commons (around 42 minutes in length) - where I made my Brexit Statement and took questions following - here:  www.bbc.co.uk/iplayer/episode/m00106qf