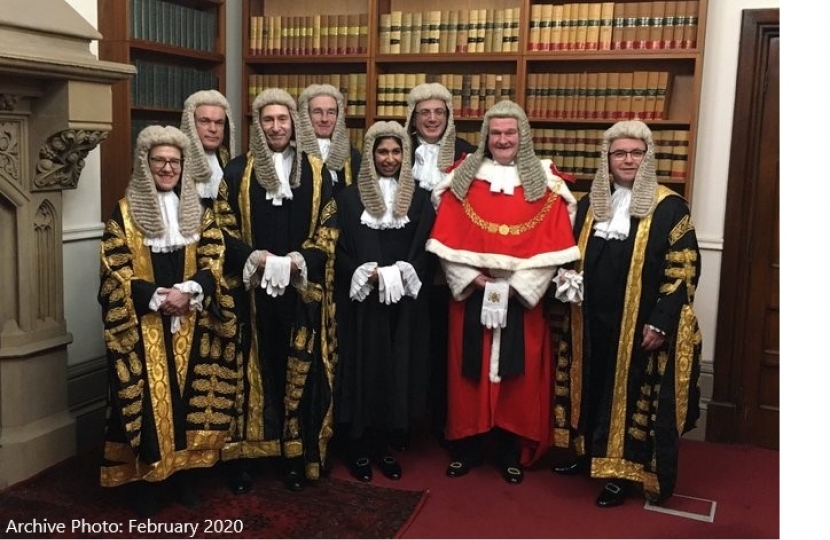 I was delighted to be able to catch up with the Lord Chief Justice, The Right Honourable Lord Burnett of Maldon, albeit virtually rather than our usual face-to-face meetings. The Lord Chief Justice is the Head of the Judiciary of England and Wales and the President of the Courts of England and Wales and we had a virtual meeting in the last fortnight together with the Attorney-General.

Indeed it was the Lord Chief Justice who swore me into office as Solicitor General nearly one year ago, on Tuesday 30th July 2019. This took place at the Royal Courts of Justice in London and I was also sworn in as one of Her Majesty’s Queen’s Counsel on the same day.

A Queen’s Counsel is a lawyer who is appointed by the monarch to be one of “Her Majesty’s Counsel Learned in the Law”. This honour is reserved for the country’s top lawyers and is an honour given to Solicitors General and Attorneys General.

Lord Burnett has dedicated 40 years of service in the legal profession and has undertaken exceptional work, particularly during the difficult times caused by the pandemic. I am pleased that the majority of Courts and Tribunals are now open for essential face-to-face hearings, having taken significant steps towards re-opening all Court buildings.

Throughout this pandemic, the justice system has continued to function thanks to the hard work in the judiciary in making adjustments including the use of new video technology. I am pleased that there are discussions as to how such measures and lessons can be used to benefit the justice system permanently, and I expect to see more virtual hearings.

I am also delighted that work has begun to develop “Nightingale Courts”, with a working group having been established to develop such plans. These would use public spaces – for instance, civic centres or university moot courts - to allow traditional court buildings to manage more work while maintaining social distancing, whether that be by hosting full hearings or allowing victims and witnesses to attend remotely.