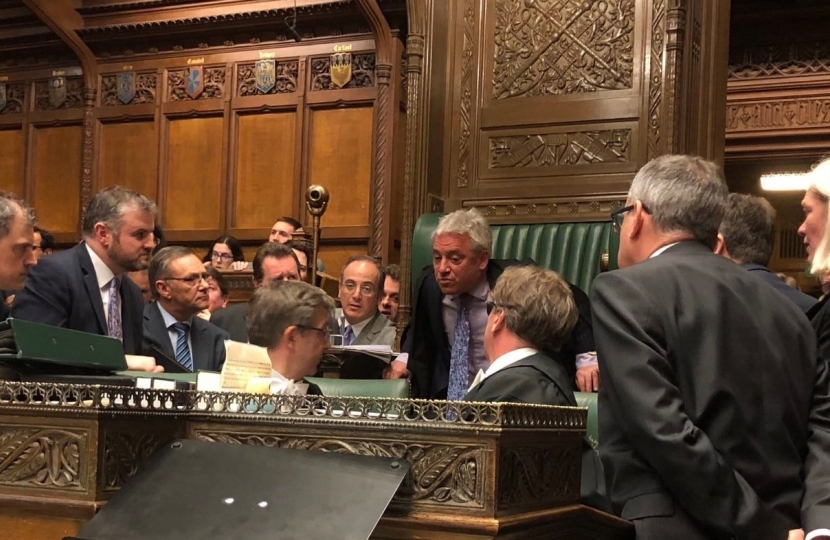 In the past fortnight there have been numerous rounds of voting on various Brexit options in order to try and break the current deadlock with regards to Brexit – this included voting until midnight on one day and a vote being tied for the first time in over 25 years- however, as at Monday morning 8th April, the deadlock remains. Parliament would currently now normally be in Easter Recess, however, in order to continue work on Brexit the Easter Recess has now been cancelled, as was the February half-term recess. I continue to work in Parliament.

Whilst it has been the Government who have been working hard to secure an orderly exit from the EU, a large number of MPs in the House of Commons have been doing everything they can to frustrate and obstruct the process, including action which has in my view severely damaged our constitutional procedures.

With the help of extraordinary and controversial rulings from Speaker Bercow, parliament has now held no fewer than twelve “indicative votes” in the House of Commons. This indicative votes process upends the balance between our democratic institutions and sets a dangerous, unpredictable precedent for the future.

Nevertheless in both rounds of voting on indicative options, the House of Commons failed to indicate a preference. In fact, more MPs have actually voted for the Prime Minister’s Withdrawal Agreement than any of the 12 indicative votes in recent weeks.

Once again, it has been proven that the Prime Minister’s deal is the only option on the table that can deliver an orderly Brexit. In the second round of indicative votes which took place on Monday, 1st April four options were put in front of the Commons: a second referendum, a Common Market 2.0, a permanent Customs Union and a revocation of Article 50.

Each of the four options were also rejected in the first round. I voted against all four options because all four led to a weaker deal for Britain or No Brexit at all. A second referendum and a revocation of Article 50 would have flown in the face of democracy in rejecting the democratic will of the people, and a Common Market 2.0 would have delivered a Brexit in name only which would have left us beholden to the EU’s rules.

An attempt to force a third round of indicative votes was very narrowly defeated. The motion received 310 votes in favour and 310 against, producing the first tied vote in the Commons since 1993 when the Commons tied a vote over the Maastricht Treaty. On this occasion the Speaker followed precedent and voted with the Noes to defeat the motion.

The Prime Minister’s deal remains the only credible option which delivers the referendum result by returning control of our laws, money, courts and borders.

Following the failure by Opposition Parties and fervent Remain MPs to force a watered down Brexit or no Brexit at all on the Government, they are currently attempting to breach parliamentary precedent by passing a Bill without the Government’s consent.

The so-called ‘Cooper-Letwin Bill’ seeks to force the Government to pursue a further extension to Article 50 and thus rule out a No Deal. I disagree with this course of action, not only because it is a constitutional outrage but because the Bill would severely damage the Government’s negotiating position. No serious negotiator would go into a negotiation and rule out walking away from that negotiation – also the simple fact is that the legal default is to leave without a deal if there is no deal in place. This Bill was rushed through the Commons in five hours, forcing the Commons to sit until around midnight on the night of Wednesday, 3rd April. Even uncontroversial Bills invariably take months to pass to ensure they have been properly considered. We should certainly not rush Bills of such integral importance and controversy. The Bill passed through the Commons by one mere vote and at the time of writing is now with the House of Lords.

The House of Commons has continually failed to approve any Brexit plan and we must now look to ways to break this deadlock and remove the uncertainty over our future. Once again the Commons has forced the Prime Minister’s hand and therefore, the Prime Minister has asked for a short extension to Article 50 in order to allow MPs to agree a withdrawal deal.

MPs – mainly Opposition MPs – continue to use parliamentary procedure to frustrate Brexit. I am clear that we must deliver the result of the referendum and leave the EU, and I will continue to fight for this.