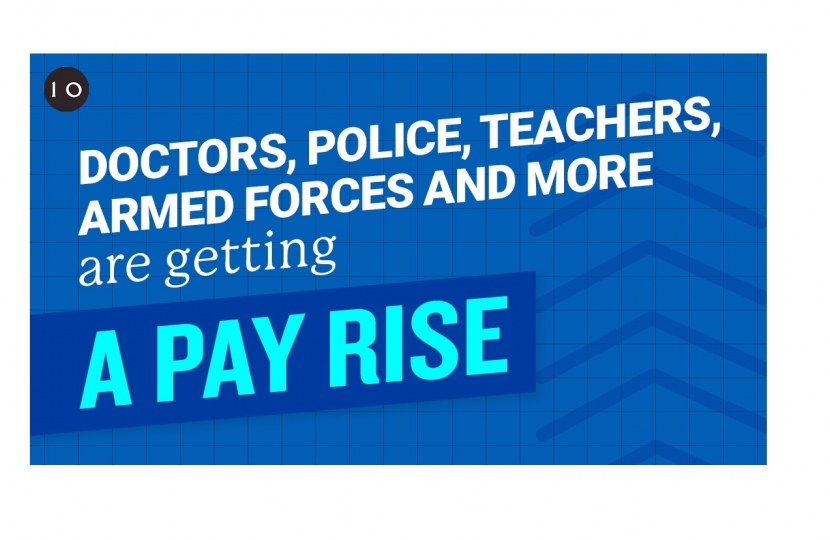 I welcome the Government’s decision to give 900,000 public sector workers a pay rise of above the rate of inflation for doctors, police, teachers and more in the public sector.

Our public sector workers deserve to be recognised for their hard work as it is their commitment and dedication that ensures our essential public services continue to be delivered to those that need it during challenging times.

The Government has accepted the recommendations made by the independent pay review bodies and therefore have announced a significant, real-terms pay increase which, for the majority, is the third inflation-busting pay rise in a row, following the lifting of the 1% cap at the end of 2017/18.

Teachers are set to receive their biggest pay rise in 15 years in a landmark pay deal for the sector, benefitting around 450,000 workers. This represents the first step to delivering this Government’s commitment to increase teachers’ starting salaries to £30,000 by 2022/23.

Contrary to some incorrect reports on social media, nurses and others are indeed also receiving substantial pay rises this year. As part of our long-term plan for the NHS, there is a commitment to staff through the “Agenda for Change” pay award, agreed in the 2017/18 financial year which covers the three years after.

This means that the pay of a healthcare assistant will go up by 26%, or nearly £4,000, over the three years from 2017/18. A Nurse between three- and four-years’ experience will receive a 25% increase which is more than £6,000 over three years, and the deal delivers a real-terms pay rise for all nurses this year, averaging 4.4% for those not already at the top of their pay scale.

The existing three-year Agenda for Change pay deal means, for instance, that:

Pay in respect of Agenda for Change staff, which includes nurses, will be revisited for 2021/22 once the benefits from the existing three-year pay deal have come into effect.

I am also pleased that this Government is following through on our 2019 General Election manifesto in re-introducing bursaries for student nurses. As part of our commitments to the NHS and its staff, the Government has pledged to support 50,000 more nurses, with students receiving a £5,000-£8,000 annual maintenance grant every year during their course to help with their cost of living. This initiative has been well-received by Universities, students, and industry alike, and will mean everyone will receive at least £5,000, with further funding above that sum for certain geographical regions or nursing disciplines that are struggling to recruit.