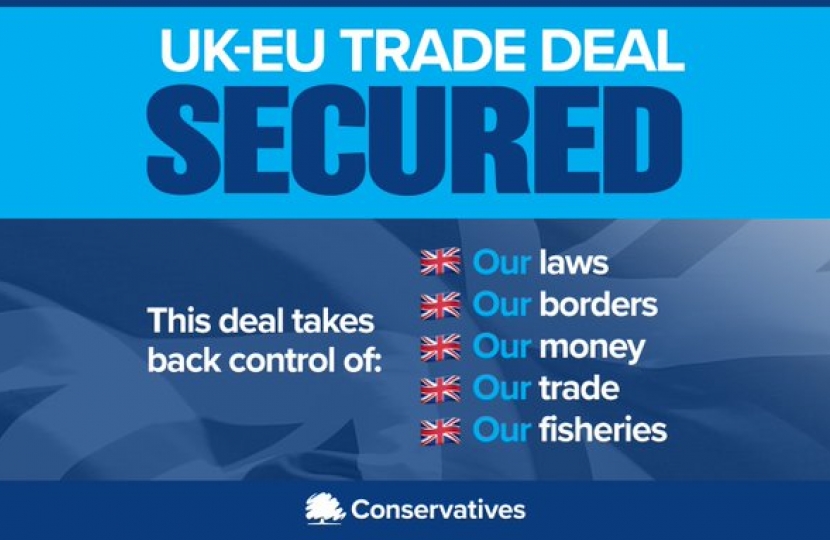 I was delighted that, following a period of four-and-a-half years, the government delivered on its Election promise, following the clear message from voters in Northampton and the country at large, leaving both the Customs Union and Single Market, as instructed by the electorate.

We are now an independent trading nation and this trade deal will help create opportunity and prosperity for all parts of our United Kingdom.

At the time of the referendum in 2016, after much consideration I voted to Remain.

However, respecting democracy is paramount, and the people had made a decision to Leave. Indeed the people of Northampton did so by 58.4%.

I subsequently voted for each of the Government’s Brexit bills brought before the House of Commons. The UK’s future is bright, and Brexit presents countless opportunities. We will unleash Britain’s potential and prosper with our new-found freedoms.

This trade deal with the EU is the first free trade agreement based on zero tariffs and zero quotas that the EU has ever agreed and represents a brilliant win for this country.

We are also making excellent progress with our trade negotiations, having reached an agreement with over 60 countries, estimated to be worth circa £900 billion to UK trade.

The deal we signed with Europe provides us with many benefits, including:

The commitments made to the British public during the 2016 referendum and in the general election last year have now been delivered. We have taken back control of our money, borders, laws, trade and waters, and I was therefore delighted to vote for the deal on 30th December.

Thanks to our new ability to control our waters we have already taken measures to ban ‘pulse fishing’ in UK waters (when thousands of fish are electrocuted in order to bring them to the surface), we have been able to remove the dubbed “tampon tax” from sanitary products which EU rules previously did not allow us to do, and we have taken steps to substantially improve animal welfare. We are no longer bound by EU law. There is no role for the European Court of Justice. All of the Government’s key ‘red lines’ about returning sovereignty have been achieved. Since 1st January we now have full political and economic independence, and our laws will once again be fully determined by our own elected politicians.

Teachers have been working hard in Northampton to establish and maintain online lessons to enable education to continue as efficiently as possible through remote learning programmes.

I wanted to experience some ‘virtual teaching’ at a secondary school in Northampton via MS Teams.