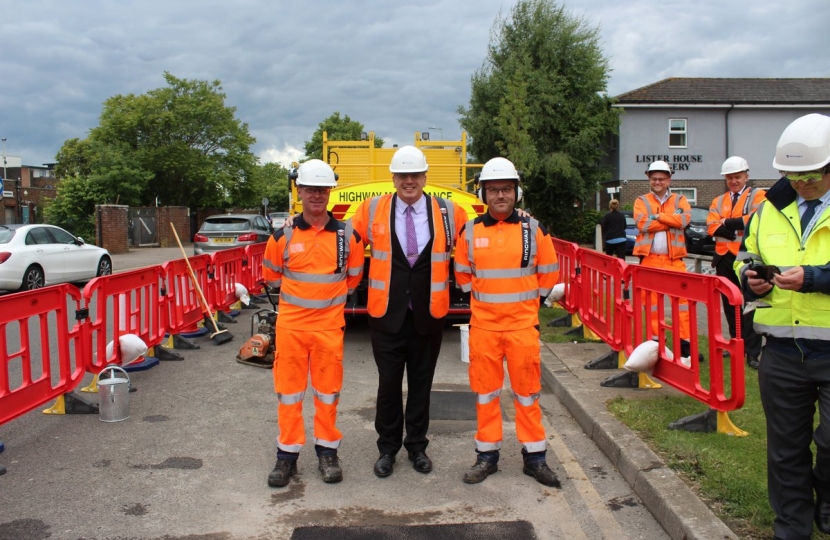 During my over 9 years as the Member of Parliament for Northampton North I have been a consistent and ardent campaigner against the blight of potholes. Potholes are of course a huge nuisance and safety hazard for motorists, cyclists and pedestrians.

I previously lobbied the Government to invest in tackling the blight of potholes here in Northamptonshire. This resulted in me obtaining more than £5 million in extra roads investment for our area. Some years ago the government set up a National Pothole Fund at my instigation to address this issue. You can read more about this here: https://www.michaelellis.co.uk/campaigns/pothole-success-budget.

Now it has gone full circle as, following my promotion to Minister of State for Transport, I am now the Government minister with responsibility for roads, and therefore, potholes!

As the Minister I am 100% committed to investing in our roads system and tackling the issue of road maintenance not only in our town and county, but nationwide. I am pleased that the Autumn Budget announced a further £420 million for highways authorities to fill potholes and carry out other roadworks.

In order to learn more about the Government’s work in this regard I recently visited Hertfordshire, a county which has recently received several million pounds for a new pothole fund. I visited a pothole repair site and saw in action how the Government’s funding in this area was benefiting local communities, and later went to their County Hall to hear about the latest innovations in traffic management.

I was delighted to officially open the brand new Northamptonshire Police Training Centre in Pyramid Close, Weston Favell, on Friday 10th July. I unveiled a plaque alongside the Police, Fire and Crime Commissioner, Stephen Mold.