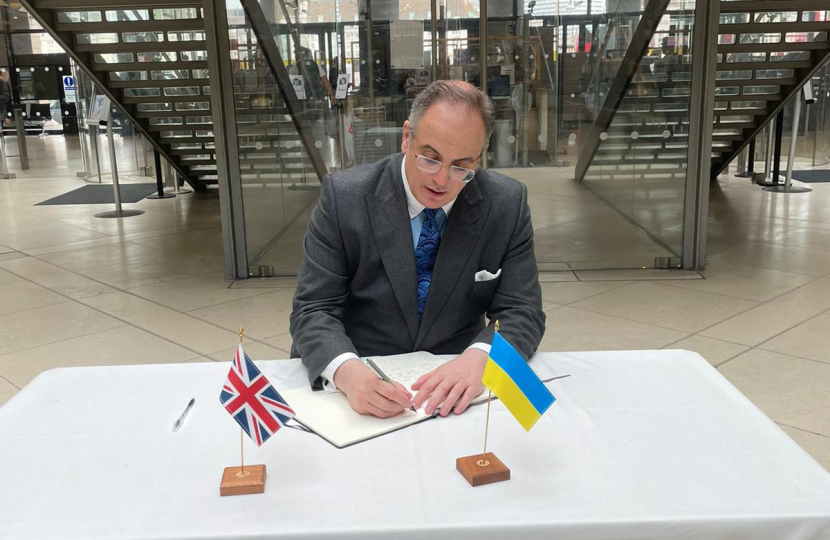 In Parliament recently I was pleased to add my name to the “Book of Solidarity for Ukraine”, initiated by the Speaker of the House of Commons, which will be sent to the Ukrainian Parliament, the Verkhovna Rada.

Putin’s barbaric invasion of Ukraine is a clear violation of international law. Ukraine's freedom and independence must be restored, and we stand with the people of Ukraine as the UK provides much appreciated weapons support on the ground, enormous cash support financially, and has imposed the heaviest sanctions on Russia as well as those with Kremlin links, and as we offer sanctuary to displaced people here in the UK.

I was present in the House of Commons to hear the historic address given online by President Zelenskyy. In the President’s powerful address, he said:

“We do not want to lose what we have, what is ours, our country Ukraine. Just the same way you once didn’t want to lose your country when the Nazis started to fight your country and you had to fight for Britain… We will fight until the end, at sea, in the air. We will continue fighting for our land, whatever the cost.”

“We will fight in the forests, in the fields, on the shores, in the streets… We’re thankful for this help and I’m very grateful to you Boris...”

This Government has brought forward a generous humanitarian offer to Ukrainians who want to come to the UK to escape the conflict. The Home Secretary has announced a new Ukraine Family Scheme for those with family ties to the UK, and we are extending the scheme further to include aunts, uncles, nephews, nieces, cousins and in-laws. We have also set up a new Humanitarian Sponsorship visa, and the Department for Levelling Up, Housing and Communities is working at pace to set that up. Well in excess of 130,000 individuals in the UK have so far volunteered to take in Ukrainian refugees and people can register to house a Ukrainian refugee on the following website: https://homesforukraine.campaign.gov.uk/

The situation in Ukraine is appalling, and the government is doing everything it can to support Ukraine and its people.

The UK has been a world leader and led the way in support of Ukraine in the following ways:

1) the UK has given the most financial aid of any country in the world, some £400 million;

2) the UK has been leading in sending much-needed lethal arms to the Ukrainian military;

3) the UK has been training the Ukraine military for several years, and had trained 20,000 Ukraine soldiers before the Russian invasion;

4) the UK was the first country to block Russian aviation;

5) the UK has placed the heaviest sanctions against Russian companies and banks;

6) the UK has been encouraging the EU to go further with sanctions such as on Russian banks and on the Swift payment system;

7) existing UK laws made it initially more difficult to apply sanctions on individuals without very high levels of evidence, but the Government rushed through emergency laws in record time and then applied sanctions against more Russian oligarchs.

We will continue to stand with the people of Ukraine.

(Photo: Michael Ellis MP signing the Book of Solidarity for Ukraine at the Houses of Parliament)