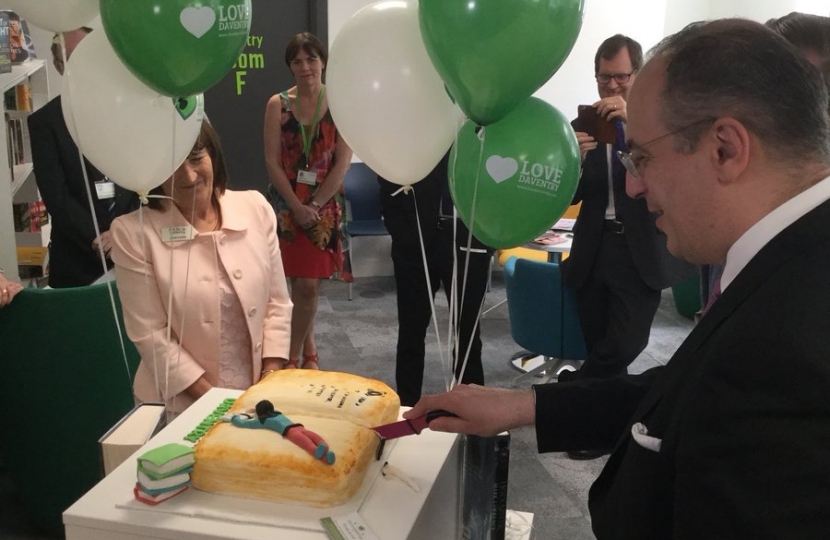 On Friday, 24th May I was delighted to officially open the new Daventry Library in its new location in St John’s Square in Daventry town centre.

I was invited to open the library whilst serving in my previous role as Minister for Arts, which includes the overall superintendence of Libraries. I had actually been promoted to Minister of Transport less than 24 hours before but I particularly wanted to honour this longstanding commitment.

Daventry Library has moved from its old site on North Street to the established community hub The Abbey Centre which already hosts Citizen’s Advice, Time2Talk, Daventry Area Community Transport and Olympus Care Services meaning that all of these services are now available to residents in one convenient location. I was impressed by the new library which as well as providing all the services of the former library, will offer a dedicated children’s area, accessible toilets and baby changing, as well as an exciting new children’s outdoor area. The library boasts an impressive array of services to residents and showcases the value that they provide for local people.

During my time as Libraries Minister I consistently supported libraries all around the country and I am happy that investment has been made in libraries in Northamptonshire. This is more good news for libraries in the county following Northamptonshire County Council’s plans to keep all libraries open – especially Abington and Kingsthorpe Library in my constituency of Northampton North which are set to become community-run.