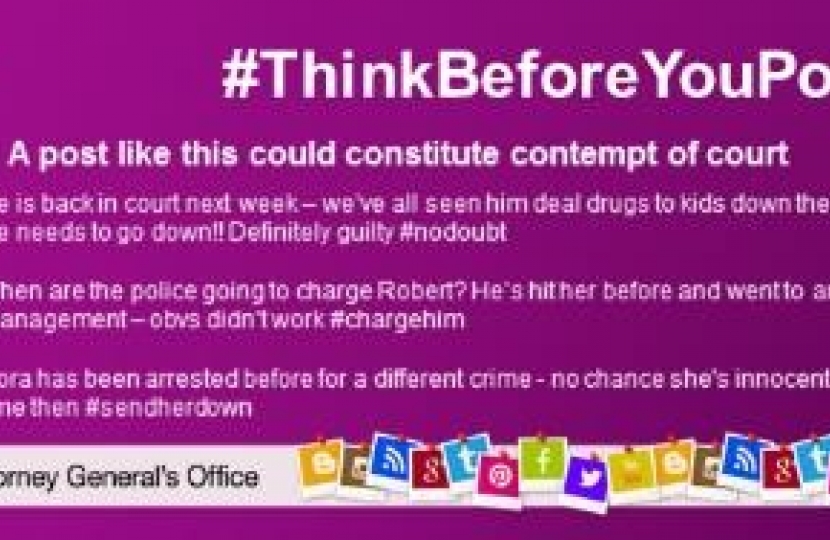 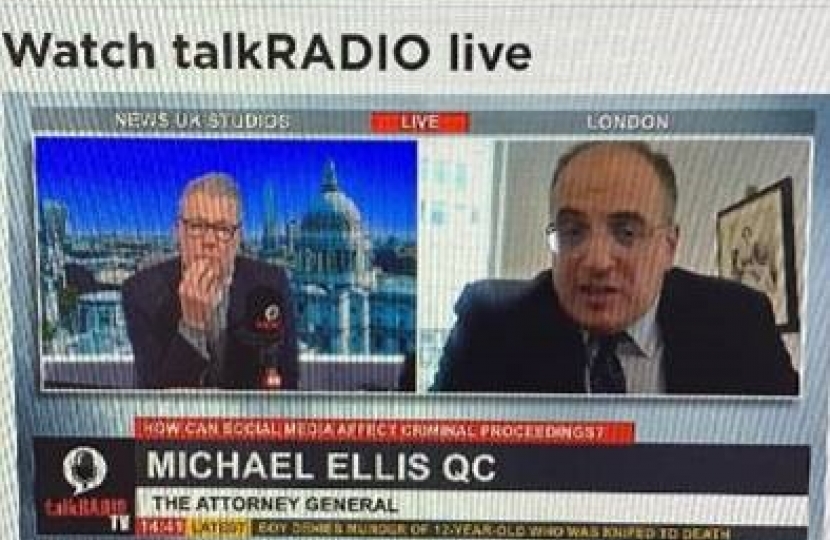 In recent weeks, I have launched a campaign called #thinkbeforeyoupost to promote awareness of the risks of ill-judged social media posts. It is critical that evidence is tested before a jury in a court of law and not in the court of public opinion.

Everyone is innocent until proven guilty and everyone deserves a fair trial. It is vital a jury makes a decision based on the evidence presented in court and not on information from news sources or online, which is why I took the decision to launch the #ThinkBeforeYouPost campaign.

In doing so, I have conducted several interviews, including with Talk Radio, BBC Radio Northampton, and The Times newspaper.

The #ThinkBeforeYouPost campaign - promoting awareness of the risks of ill-judged social media posts - is vital in highlighting how critical it is that evidence is tested before a jury, and not in the court of public opinion.

Those found to be in contempt of court could go to prison for up to 2 years, get a fine, or both. The rules on what can be published online do not just apply to journalists. Everyone is equal before the law. Members of the public can, and do, find themselves facing their own legal consequences because of something they have posted online that prejudices a court case. In general, the media are very much aware of reporting restrictions and the limitations on reporting of active proceedings, and what reporting might amount to a contempt of court, but occasionally even media organisations do also cross the line.

Similarly, I have recently requested that the Law Commission look at the issue of breaches of reporting restrictions, including those relating to naming victims of sexual offences, child victims, and other vulnerable victims. It is absolutely right that we review whether we can strengthen the law in this area, which protects these victims from being named publicly.

In 2019, a woman was found guilty of contempt of court after she breached a court order by publishing information and photographs online purporting to be of Jon Venables. She was sentenced to 8 months in prison, suspended for 2 years & ordered to pay costs of £10,000.

Again in 2019, despite signs warning against recording court proceedings, a woman streamed more than an hour’s footage from her partner’s trial in court onto Facebook. She was found in contempt of court and was sentenced to 4 months in prison, suspended for 2 years.

Similarly, in 2018 during a trial involving 2 men who had shot at a man & his father, a woman breached a court order by posting videos & photos identifying 2 of the witnesses. She was found in contempt of court & given a 3 month prison sentence, suspended for 2 years

Learn more about Contempt of Court and this campaign by perusing the following websites:

During my time as Attorney General over the past six months, and for 18 months before that as Solicitor General, I have frequently spoken of the importance of the Unduly Lenient Sentence (ULS) Scheme.