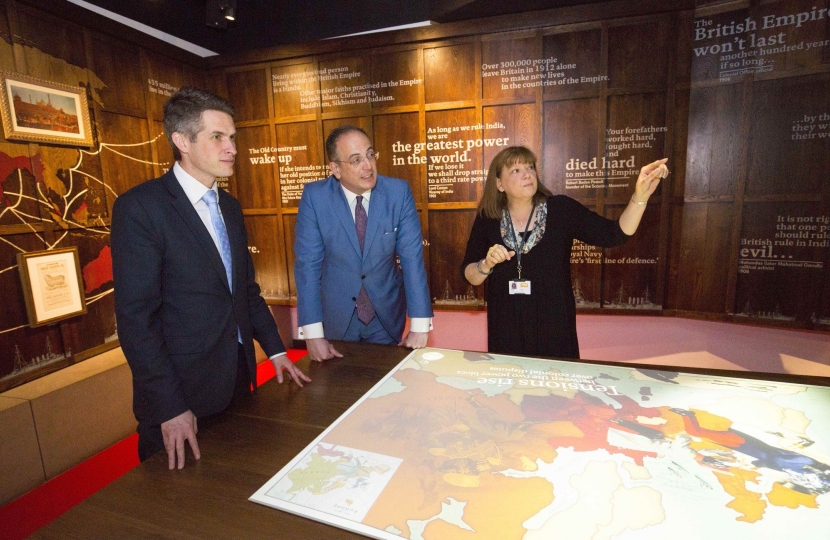 On Wednesday, 2nd May 2018 I visited the Imperial War Museum at its main site in Lambeth, London in my capacity as Minister for Arts, Heritage and Tourism, which includes responsibility for national museums.

Whilst I am the Minister with superintendence of national museums, this particular museum obviously has a close connection with the Ministry of Defence and I therefore asked the Secretary of State for Defence Gavin Williamson MP to come on the visit with me.

Founded in 1917, the Imperial War Museum has a mission to preserve and tell the war stories of all kinds of people, not only from Britain but from the countries of its former empire – the museum continues to do this work right up to present day conflict covering 100 years of experience throughout the Commonwealth.

The museum, which has free admission, had an impressive collection outlining our country’s fascinating wartime history with archives of personal and official documents on show as well as original displays of weapons, photographs, film and video material from wars involving the UK.

Visiting this museum and its very impressive exhibitions on World War One was both fascinating and harrowing. It is a warning against war.

This visit by the Defence Secretary and I was particularly well-timed as later this year marks 100 years since the end of World War One – with the official armistice day on Sunday, 11th November 2018.

I am a huge supporter of our Armed Forces and the men and women who serve are some of the best in our society, and do such an heroic job in keeping us safe and supporting those in need throughout the world.

This museum helps keep alive the memories of all those who served and fell in World War One and all wars since then, for the freedoms we enjoy today.