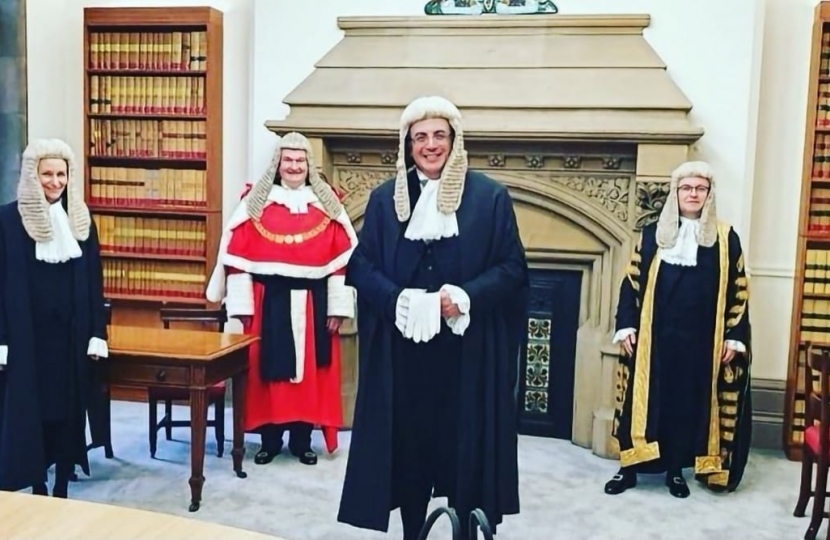 As mentioned in the last E-Newsletter, on 2nd March I was promoted to Cabinet by the Prime Minister and made Her Majesty’s Attorney General of England and Wales.

On Thursday, 11th March, I was formally sworn-in as Attorney General at a traditional formal ceremony held in the Lord Chief Justice’s Courtroom at the Royal Courts of Justice in the Strand, London.

The Lord Chancellor and the Lord Chief Justice were present on the Bench and the Chairman of the Bar Council and Head of the Law Society were also present. There were warm words welcoming me to this ancient and historic position and I very much look forward to working with them in the unique roles we each play in upholding the Rule of Law at the heart of the UK constitution.

Lucy Frazer QC MP was sworn-in at the same ceremony as my successor in the position of Solicitor General and will now work in my team. Lucy was also my predecessor, serving in that role for a couple of months prior to my appointment as Solicitor General in July 2019, and so she is familiar with some of the tasks and challenges which will present themselves in the coming months, and I look forward to working with her on them.

The position of Attorney General, in existence since at least the year 1243, is an important role in our democracy, and as the Government’s Chief Legal Advisor I have been attending Cabinet and overseeing the vital work of our prosecuting authorities.

During my 19-month tenure as Solicitor General, I appeared before the House on several occasions to take questions from Parliamentarians at the regularly-held Attorney General Questions, but on Thursday 18th March, I appeared for the first time as Attorney General.