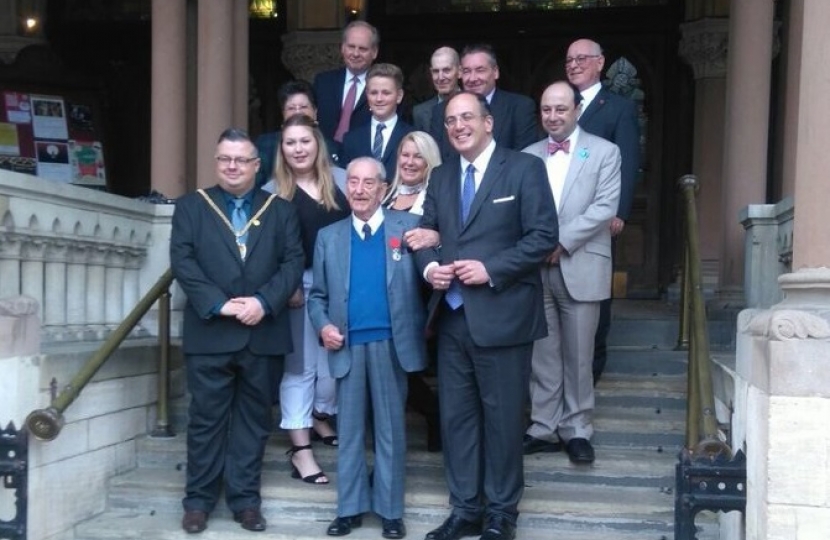 George Verden is one of my constituents and is a 94 year old World War Two veteran. In December 2016, he came to see me saying he believed he might be entitled to medals he had not received in 1945.

I wrote to the Ministry of Defence (MoD) on Mr Verden’s behalf, and in March this year George finally received the “France and Germany Star” and the “1939-1945 Star.”

You can read my previous E-Newsletter story by clicking on the following link: https://www.michaelellis.co.uk/news/michael-and-war-hero-example-constituency-casework.

The Ministry of Defence also wrote back to me to say that it was possible George may also be entitled to the French Legion d’Honneur – which is the highest French military and civilian order. Whilst this honour is normally only bestowed upon French citizens, British veterans of the D-Day campaign during WW2 may also be entitled to the medal for their service to France – George was a wireless operator and rear gunner, who took part in crucial bombing operations on D-day.

I therefore wrote to the French Ambassador in London and after further enquiries it was agreed the Legion d’Honneur would be awarded.

The original intention was for the authorities to send the medal to Mr Verden through the post.

I then invited the French Embassy to instead send a diplomat to Northampton to present the medal, in person, to my constituent at the Guildhall.

Following these enquiries, an Honorary Consul of France agreed to come to Northampton and present the Legion d’Honneur during a ceremony that I organised in the Guildhall in the presence of the Mayor of Northampton.

The event was held in the Mayor’s parlour, and George and his family, including children, grandchildren and great grandchildren were present.

The BBC attended to film the ceremony and there was a moving piece broadcast on BBC Look East.

You can read more about this ceremony by clicking on the following link: http://www.northamptonchron.co.uk/news/northampton-second-world-war-veteran-honoured-with-legion-d-honneur-medal-73-years-after-service-1-8207400.