Michael and the US Ambassador: Strengthening Transatlantic Ties 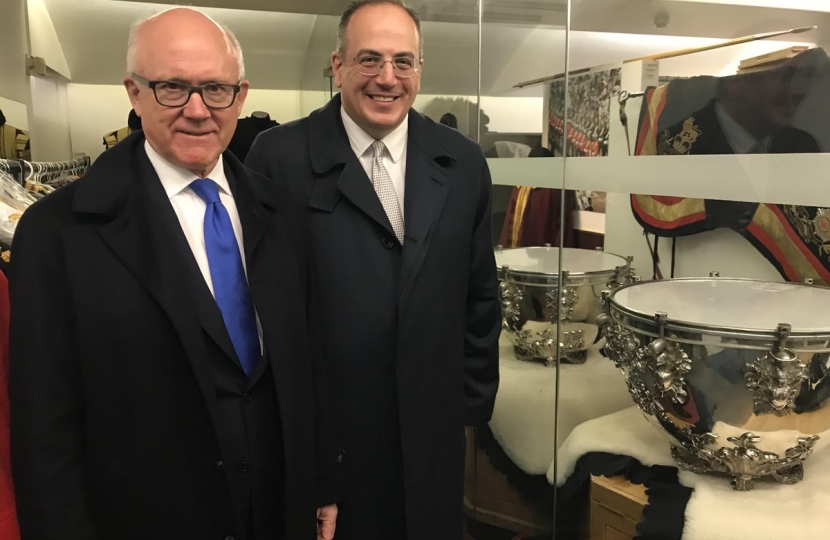 On Monday, 10th June the US Ambassador to the UK, Woody Johnson, joined me on a visit to Hyde Park Barracks. The barracks, located within a mile of Buckingham Palace, host the world-famous Household Cavalry of the British Army, who act as Her Majesty the Queen’s personal bodyguard.

I am hugely supportive of our Armed Forces, who do such an excellent job in keeping us safe at home and abroad, and who serve overseas in multiple locations to aid in recovery operations following natural disasters. I was keen for the Ambassador of the UK’s closest military ally to meet the men who serve in this distinguished division and visit the stables where the horses are so well looked after.

The Ambassador and I were given a tour of the barracks by the soldiers and then joined them for lunch.

British and American soldiers have stood side by side in conflicts all around the world for many decades now and it is an alliance that has kept us and the rest of the world safe from tyranny.

The special relationship between the UK and the US is extremely important to both our countries. It is the economic and security ties between the UK and USA which creates jobs and prosperity whilst also keeping us safe. Over a million British people are directly employed by US companies and bilateral trade supports millions more jobs in this country. Moreover, the UK is the single biggest investor into the US- and the US is the biggest investor into the UK!

As regards security, as a former Home Secretary has pointed out, the nature and depth of US-UK relations on the matter of security and intelligence has undoubtedly saved many British lives.

Diplomacy is about ensuring and strengthening these ties which benefit the people of our country and in my view it would be irresponsible not to engage with our greatest ally.