Michael and the PM in Downing Street Talks on Criminal Justice 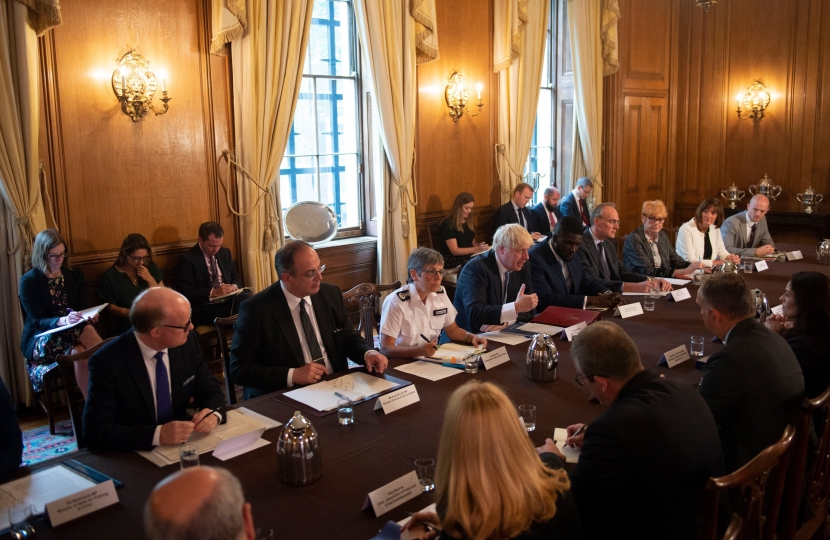 On Monday, 12th August I took part in a crucial cross-organisation meeting in No 10 Downing Street, chaired by the Prime Minister, to discuss how the criminal justice system can work better to deter and prevent crime.

As the Solicitor General for England and Wales I superintend the work of the Crown Prosecution Service. The Prime Minister called for and chaired the meeting which brought together leaders from the police, probation and prison sectors so that the Government can work closely with these sectors to reduce crime.

Tackling crime is a priority for this Government – and for me as the Solicitor General – and I am hugely encouraged by plans for 20,000 more police officers which will translate into 200 extra police officers here in Northamptonshire. You can read more about this here: https://www.northamptonchron.co.uk/news/politics/exclusive-more-police-officers-and-expanding-stop-and-search-will-help-to-tackle-rising-crime-says-minister-in-northampton-1-9035090.

I have always been an advocate of putting more officers on our streets and I am pleased that the Prime Minister is committed to doing this.

More police officers will mean more prosecutions so it is vital that the Crown Prosecution Service (CPS) has the funding it needs to deal with the extra prosecutions – a point I made during the meeting at No10. As the Solicitor General I have responsibility for the CPS and am delighted that a commitment has been made to invest an extra £85 million into the prosecution service. Many other matters were discussed including 10,000 more prison places and more cooperation between the Government and the police.

People should feel safe in their communities and this Government is fully committed to tackling the causes and effects of crime.