“Eat Out to Help Out” Scheme a Huge Success; More Than 100 million Meals Claimed, 66,000 in Northampton North 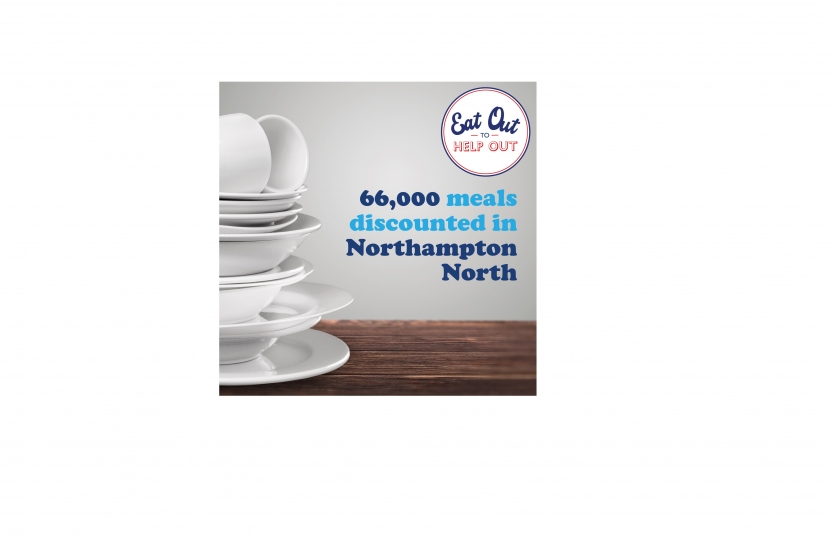 In Northampton North, more than 66,000 meals were claimed for the scheme, with a total discount claimed totalling over £363,000.

In the UK as a whole, over 100 million meals with a total value of more than £500m were claimed for, helping to protect 1.8 million jobs in hospitality. On 31st August alone, bookings were up an incredible 216% compared to the same day in 2019!

To give a better understanding of the scheme’s success:

Eat Out to Help Out was just one part of the Conservative Government’s Plan for Jobs – an ambitious £30 billion strategy to create, protect and support jobs as the country bounces back from coronavirus. The Government will continue to support the hospitality industry with a temporary discount to VAT from 20% to 5% until 12th January 2021.

I am also pleased that many establishments, following the success of the scheme, are extending the discount themselves throughout September.

The Northampton Chronicle and Echo recently published an article outlining some of the local eateries who are offering this, which can be found here: https://www.northamptonchron.co.uk/lifestyle/food-and-drink/all-places-northampton-and-surrounding-areas-extending-eat-out-help-out-half-price-food-scheme-during-september-2959756

You may read more about the success of the scheme here: https://www.gov.uk/government/news/uk-diners-eat-100-million-meals-to-protect-2-million-jobs

In the past fortnight I was very pleased to be invited to visit Good Shepherd Catholic Primary School and Northampton School for Boys to speak to some of the children and observe their new processes for dealing with Covid-19.