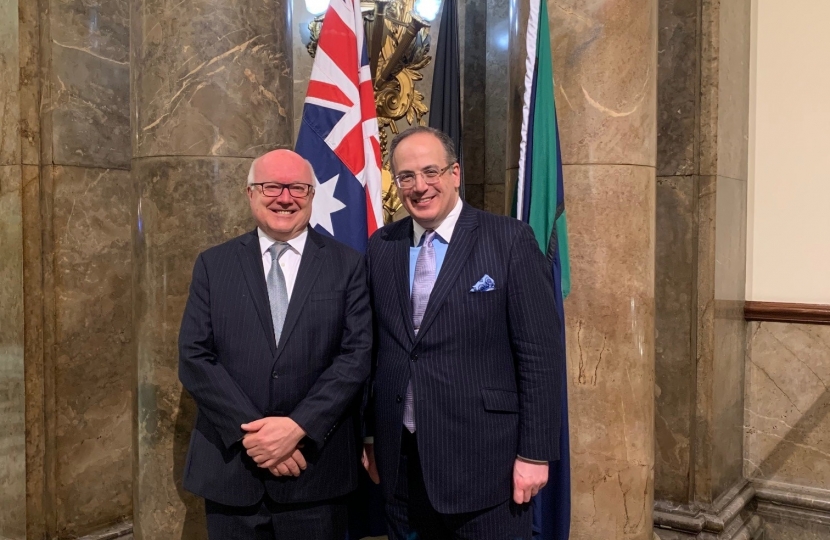 On Wednesday 22nd January I attended the Australia Day reception in Australia House in London, the High Commission of Australia in the UK.

Australia Day takes place on the 26th January every year and commemorates the anniversary of the 1788 arrival of the First Fleet of British ships at Port Jackson in New South Wales. The date of 26th January 1788 also marked the proclamation of British sovereignty over the eastern seaboard of Australia.

Australia is of course one of the UK’s longest-standing friends. Our shared history stretches across hundreds of years, two world wars, and our two Governments work closely on world issues to this day. For example, across the globe, UK forces are deployed alongside Australian counterparts, and Australia is one of our top trading partners – not to mention the tens of thousands of Brits and Australians who migrate between our countries each year.

With the Australian Bush Fires very much in mind, I took the opportunity to pass my condolences to His Excellency Mr George Brandis, the Australian High Commissioner.

The Australian bushfires are an environmental catastrophe, and there has been significant loss of life and damage to property. The human cost of this disaster currently stands at over thirty lives lost and over two thousand five hundred homes destroyed. As an animal lover, it is also terrible to hear of the destruction of habitats and of so many millions of creatures being killed and maimed in the fires.

The UK has offered the Australians any assistance they feel necessary.